The grain grown on Weiser Family Farms this spring has been an inspiration. 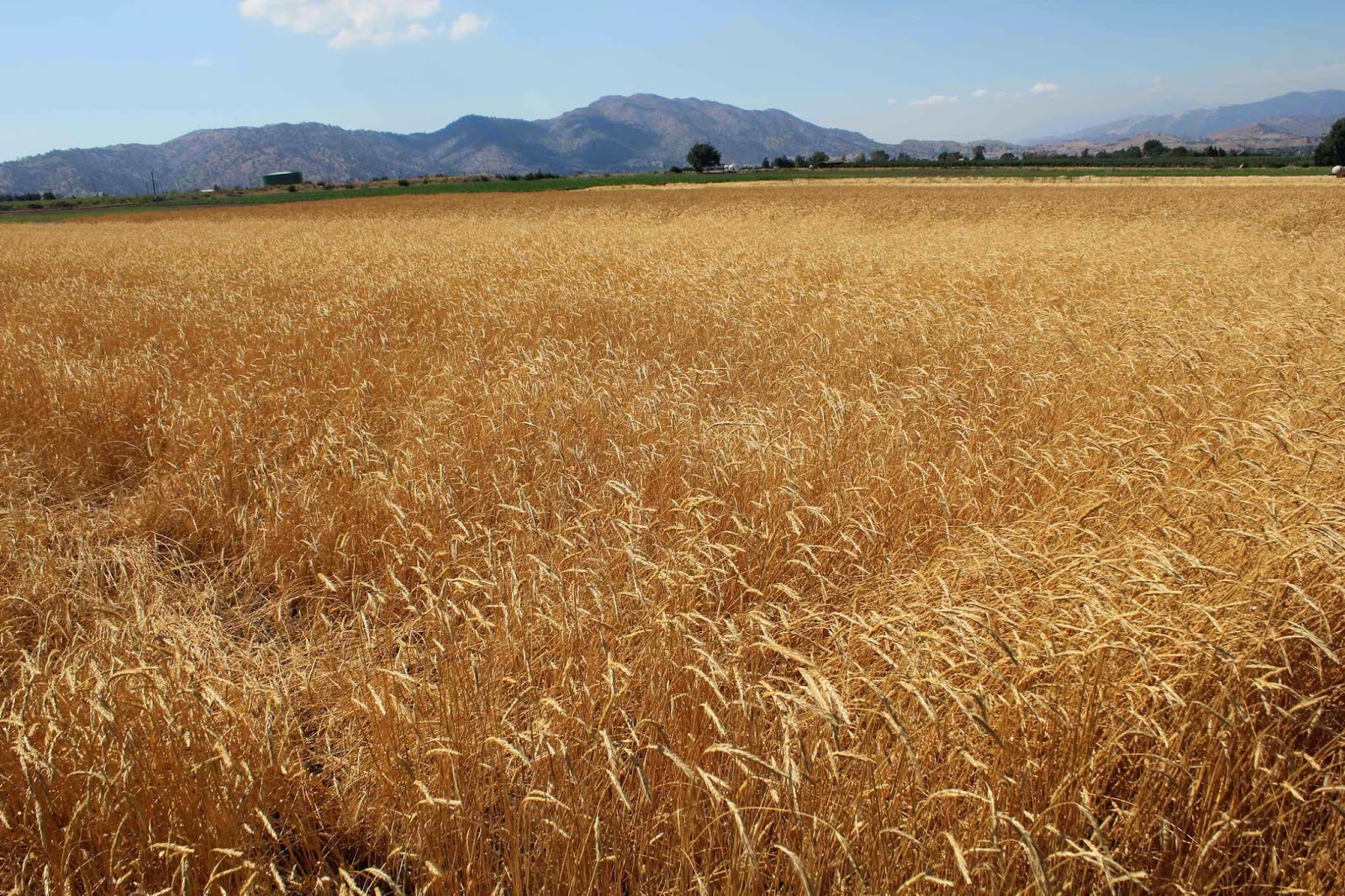 In the photograph below, Roman Rye, graces a planting just across the lane from some handsome Red Fife hard red wheat. 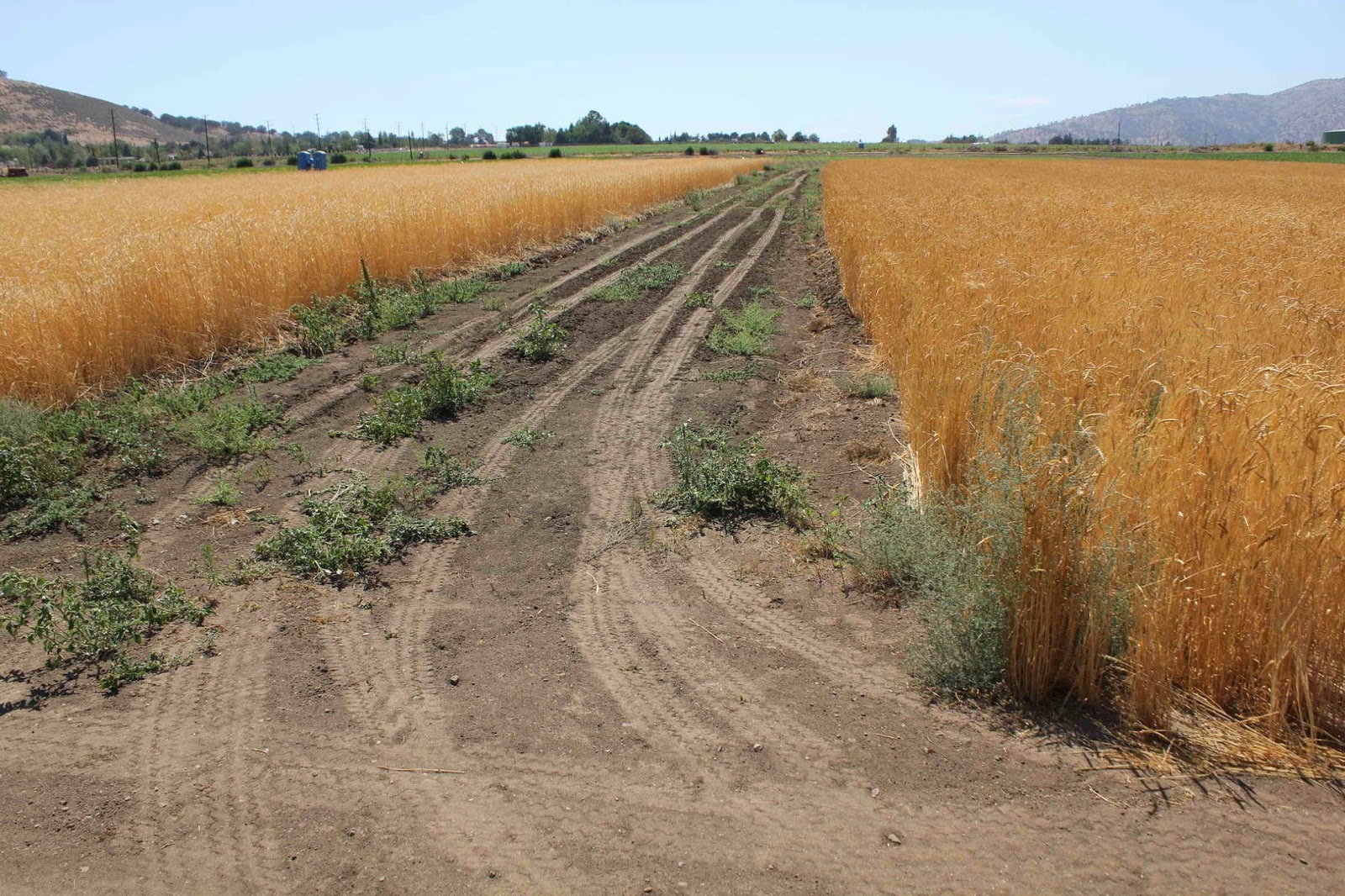 This was a bold experiment on the Weisers' part, and the sizeable crop is good to see, thriving on fields usually devoted to vegetables.  With only modest rainfall this season. 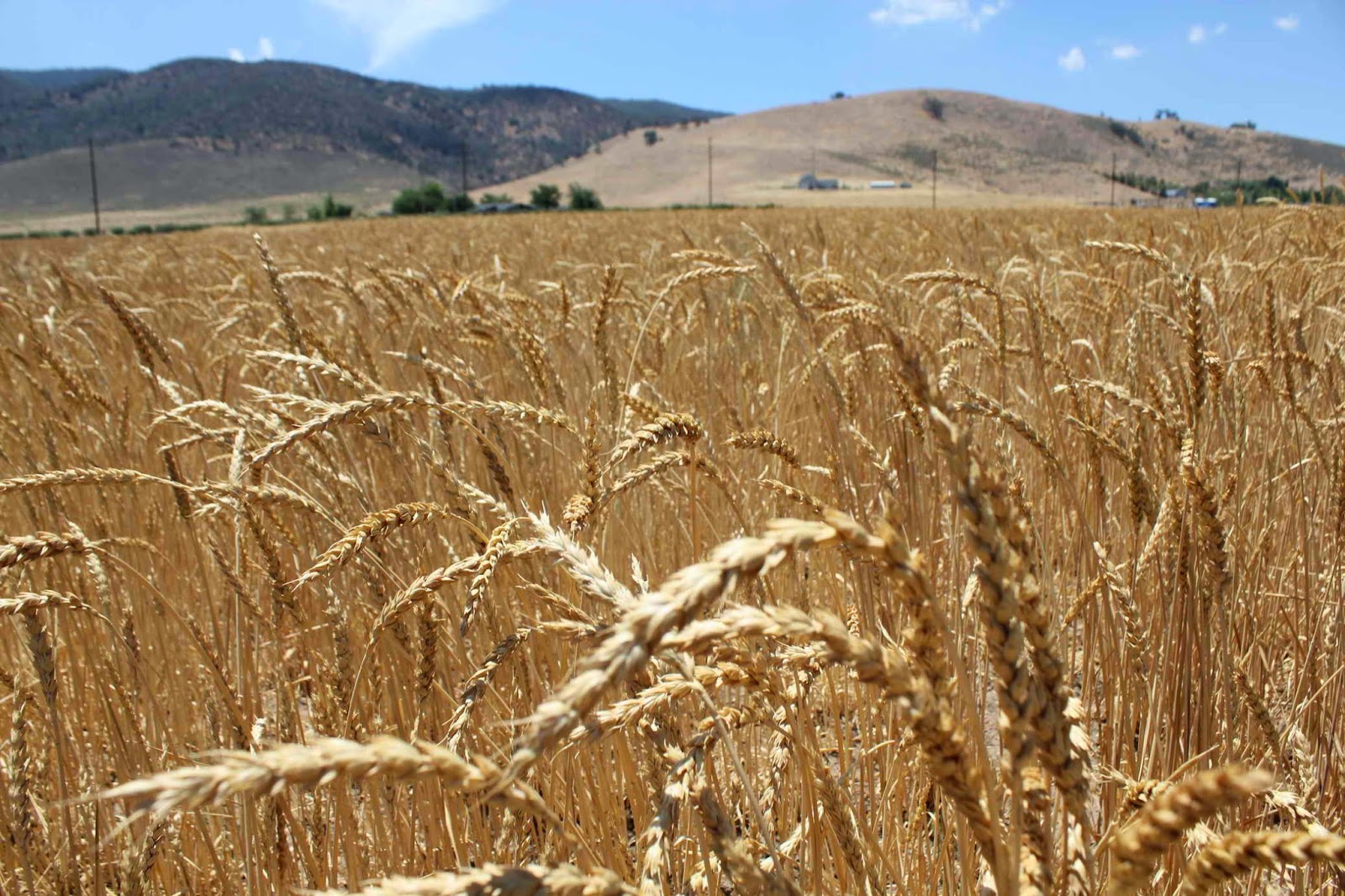 On July 21, 2014, a field of Barley was partially harvested, but the 63-year old Allis Chalmers combine needed some attention.  Nate Siemens scavenged an 8-foot long winnowing drive shaft from an even older combine, and replaced the shaft in the field. 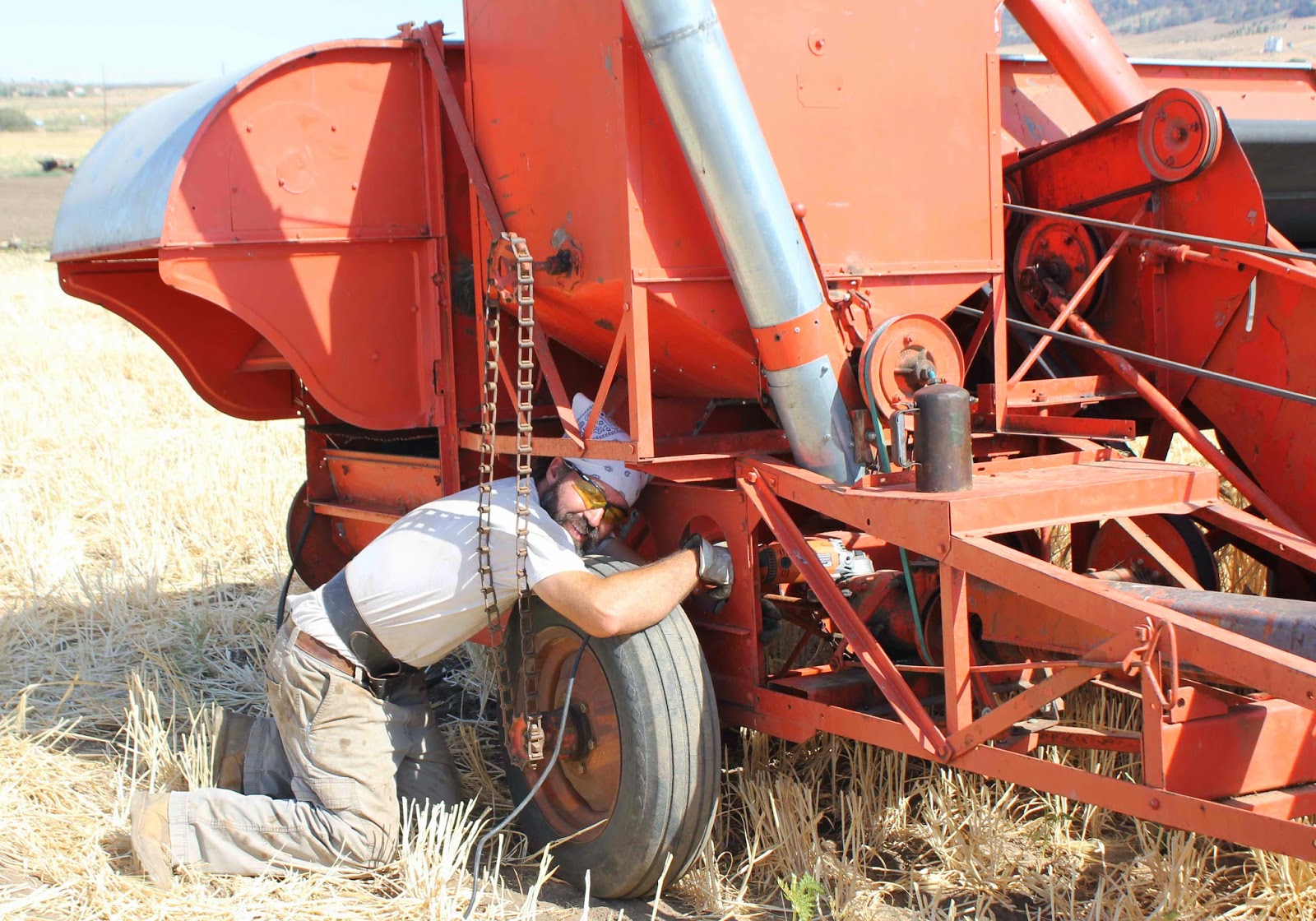 The combine came back to life and, under Nate's guidance, completed the harvest:
It's all in a day's harvest, getting the old equipment in operation to make a success of small scale grain farming ...
working toward the establishment of a real Southern California Grain Hub to make locally grown, varietal grain available to our mills so our bakers can once again turn out products made from truly fresh flour.

One of the varieties to be harvested soon in the Lompoc area is Glenn, a Hard Spring Red Wheat developed by North Dakota State University in 1997, with parentage from two varieties created there. 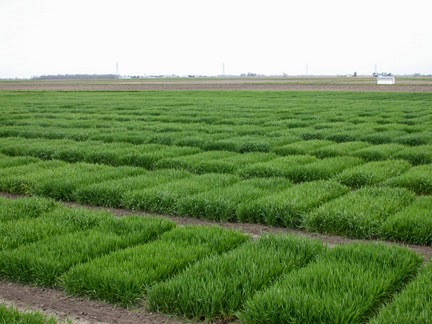 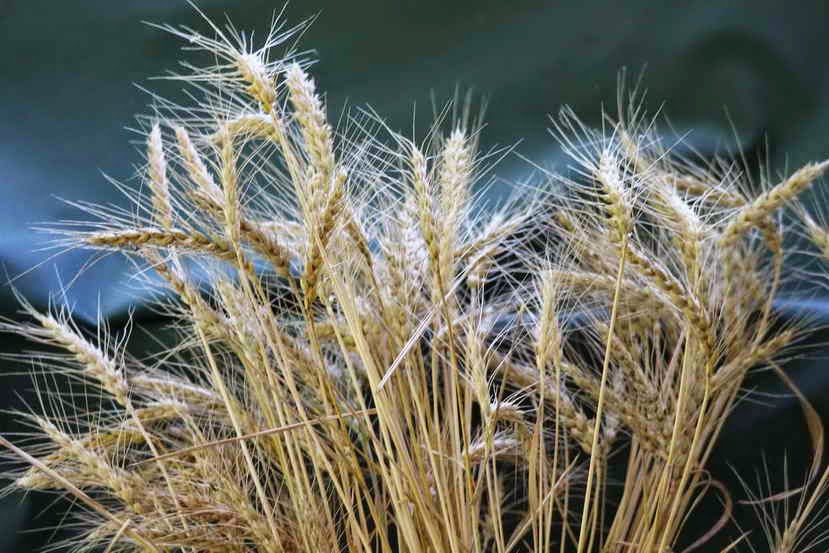 North Dakota leads the nation in the spring wheat harvest, and more than a million acres planted in Glenn is a major reason why. 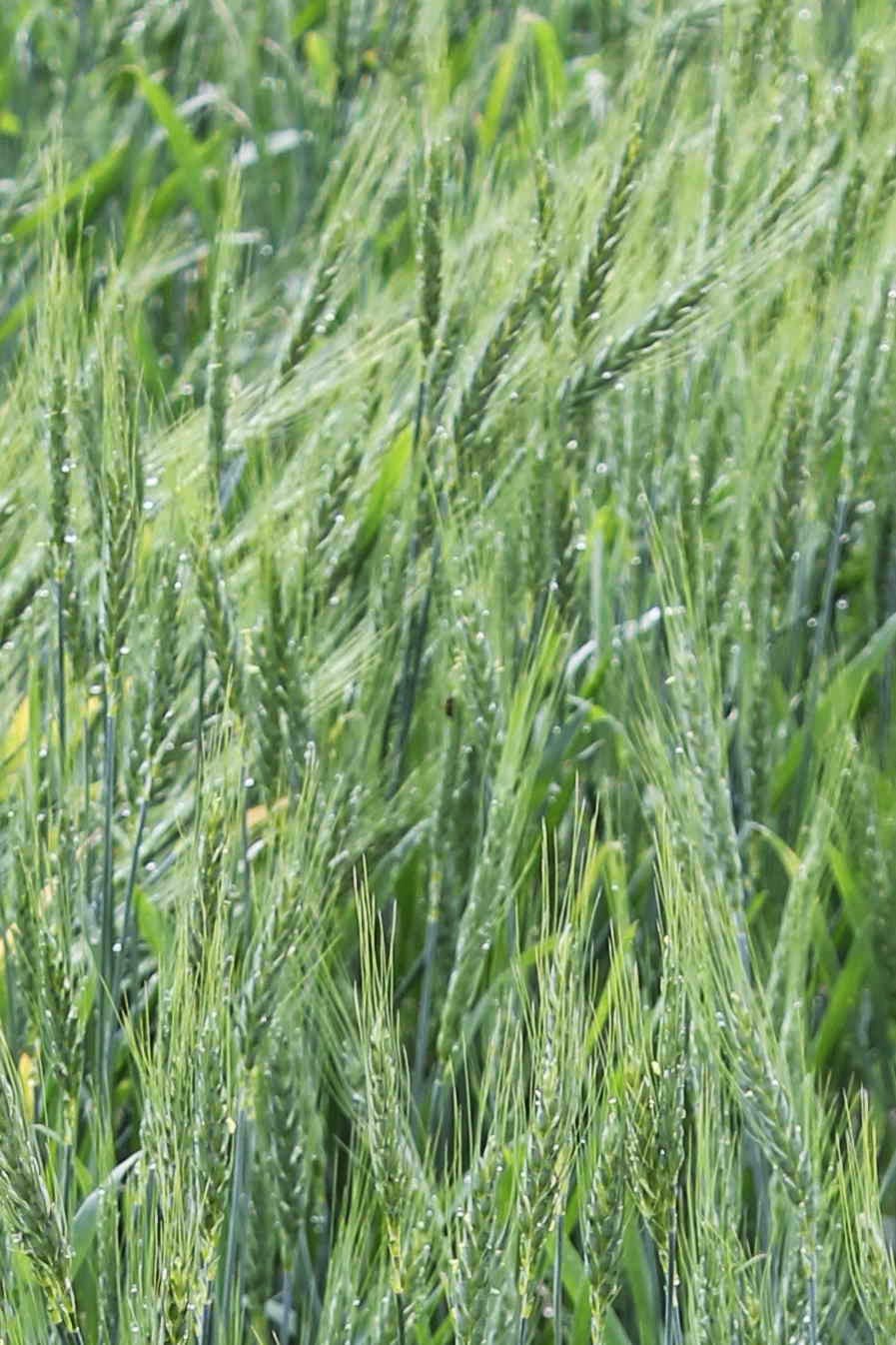 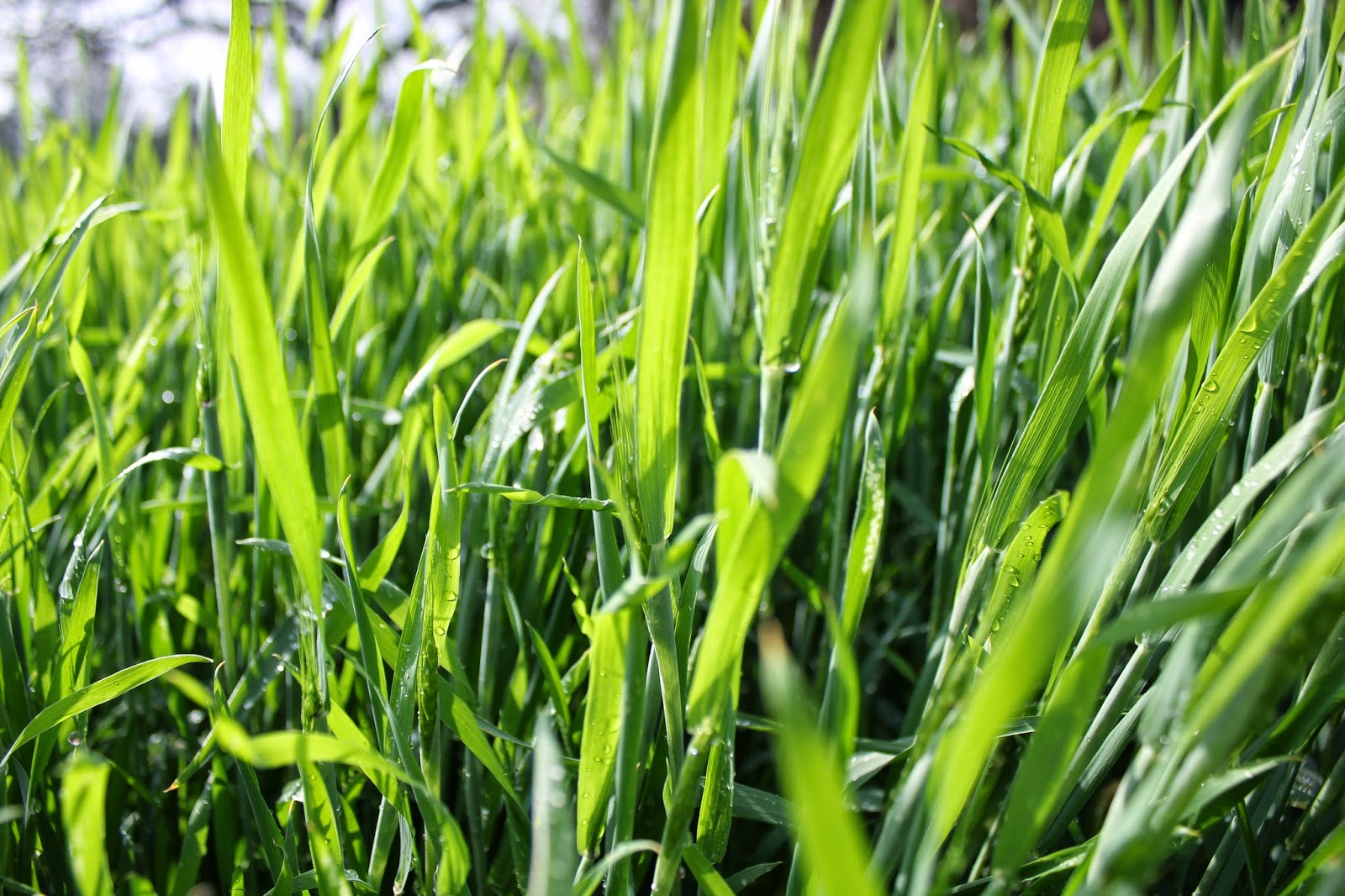 Glenn has substantial awns.  As the plant enters boot stage, the awns can be seen first, emerging just in front of the important flag leaf.  Then the immature kernels begin to show. 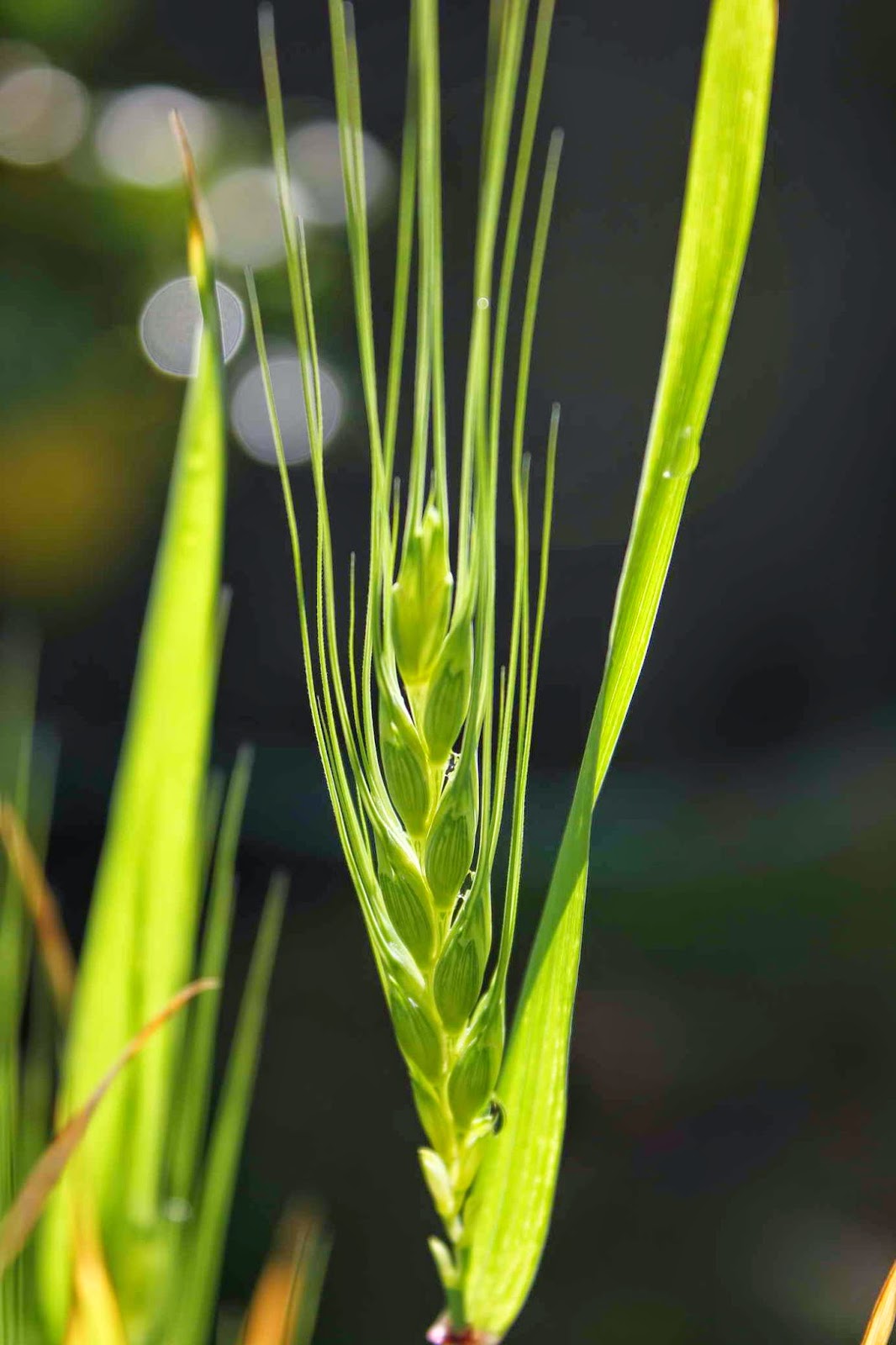 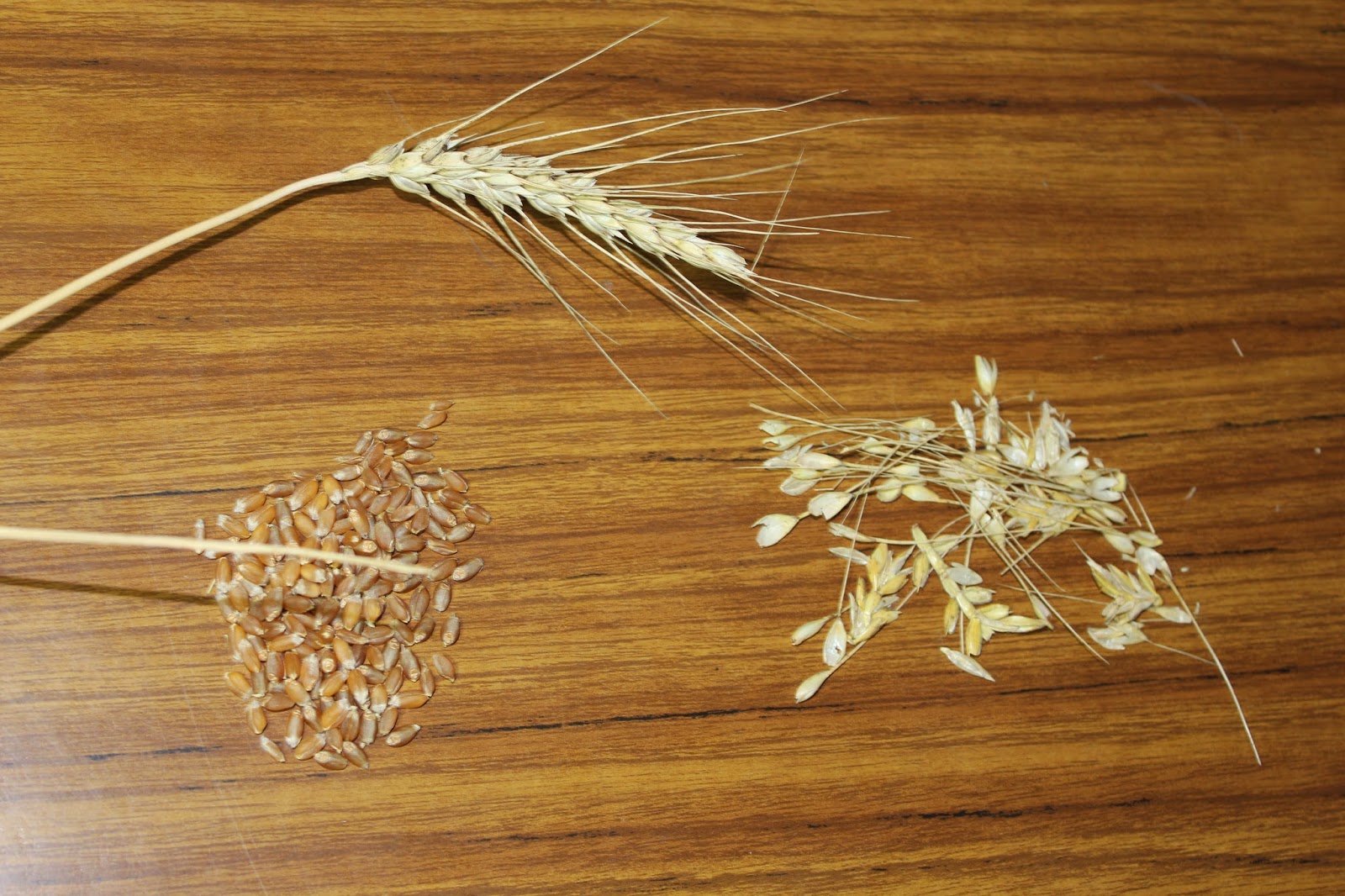 A side note on the risks of product development – in the category of “you can’t please everyone.”  One goal of modern wheat breeding is that the ripe wheat does not shatter (fall to the ground) before harvest.  Farmers report that Glenn is so good at holding onto its kernels, that threshing is more difficult, often leaving many ‘whitecaps.’ 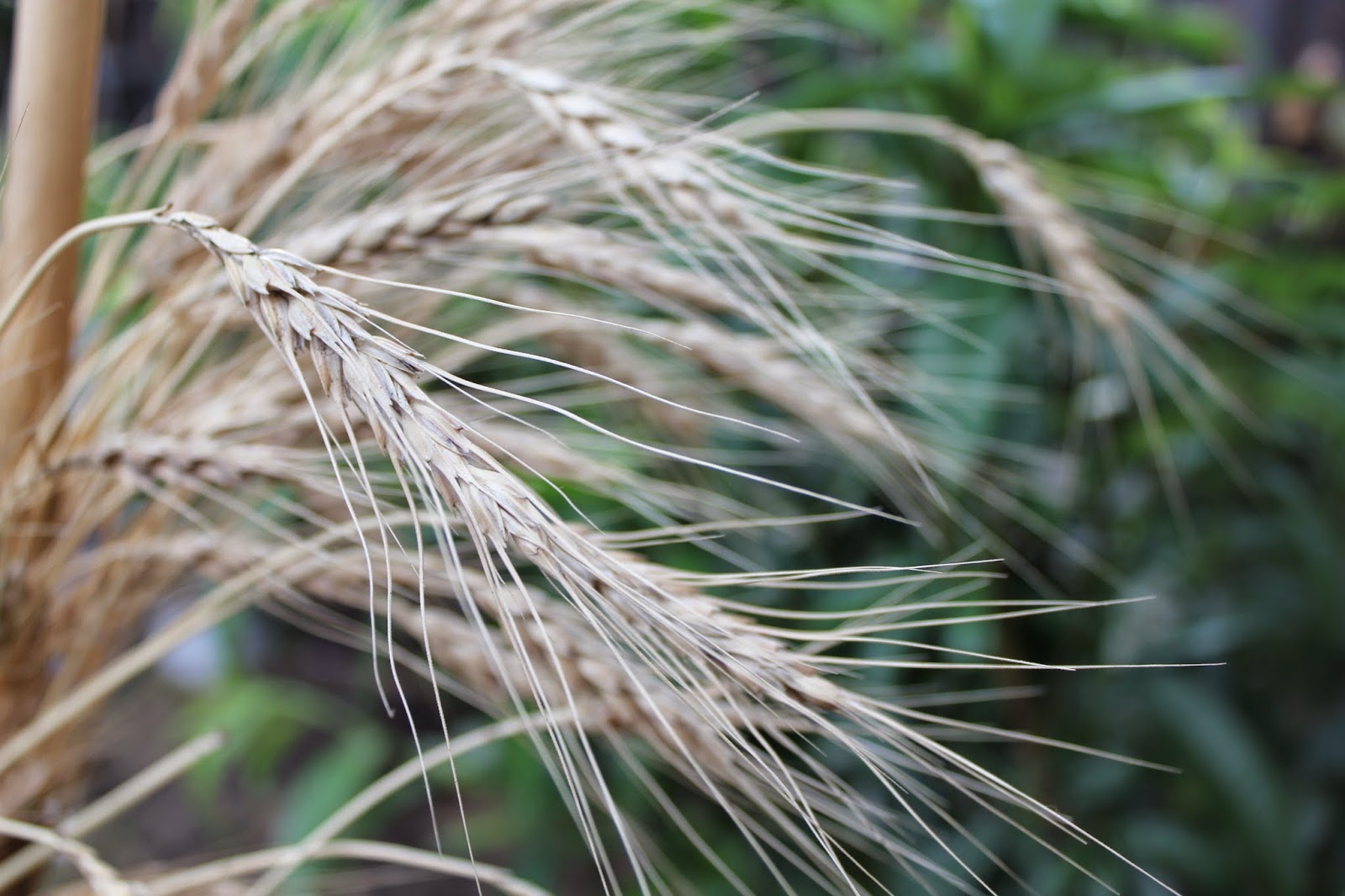 In anticipation of a wheat harvest in our area, currently scheduled for July 26th, this is a brief description of the varieties we expect to see.
Red Fife is a hard red wheat that was North America's preferred bread wheat in the 19th century. 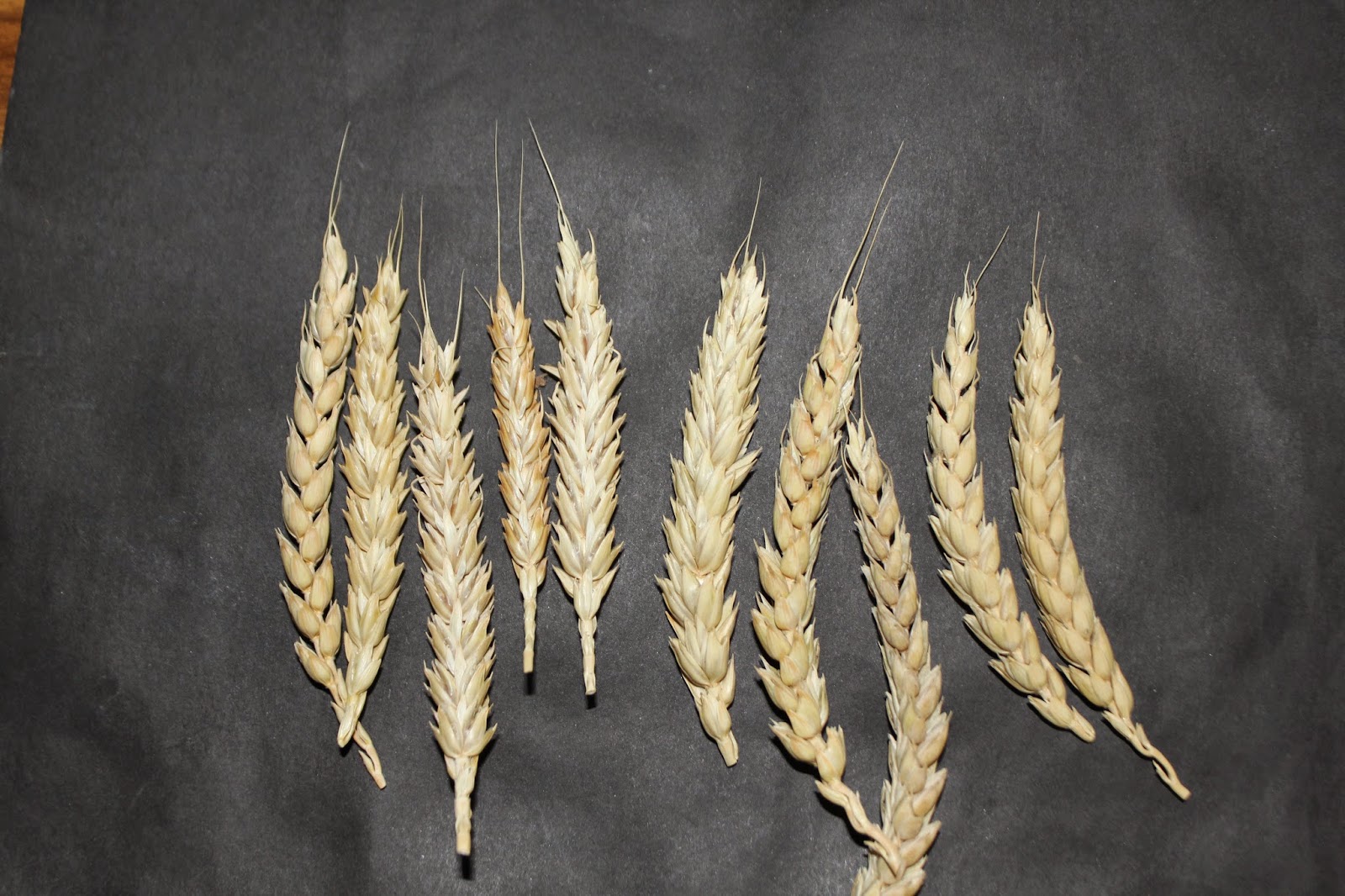 Usually it has only three short awns at the tip of the head. 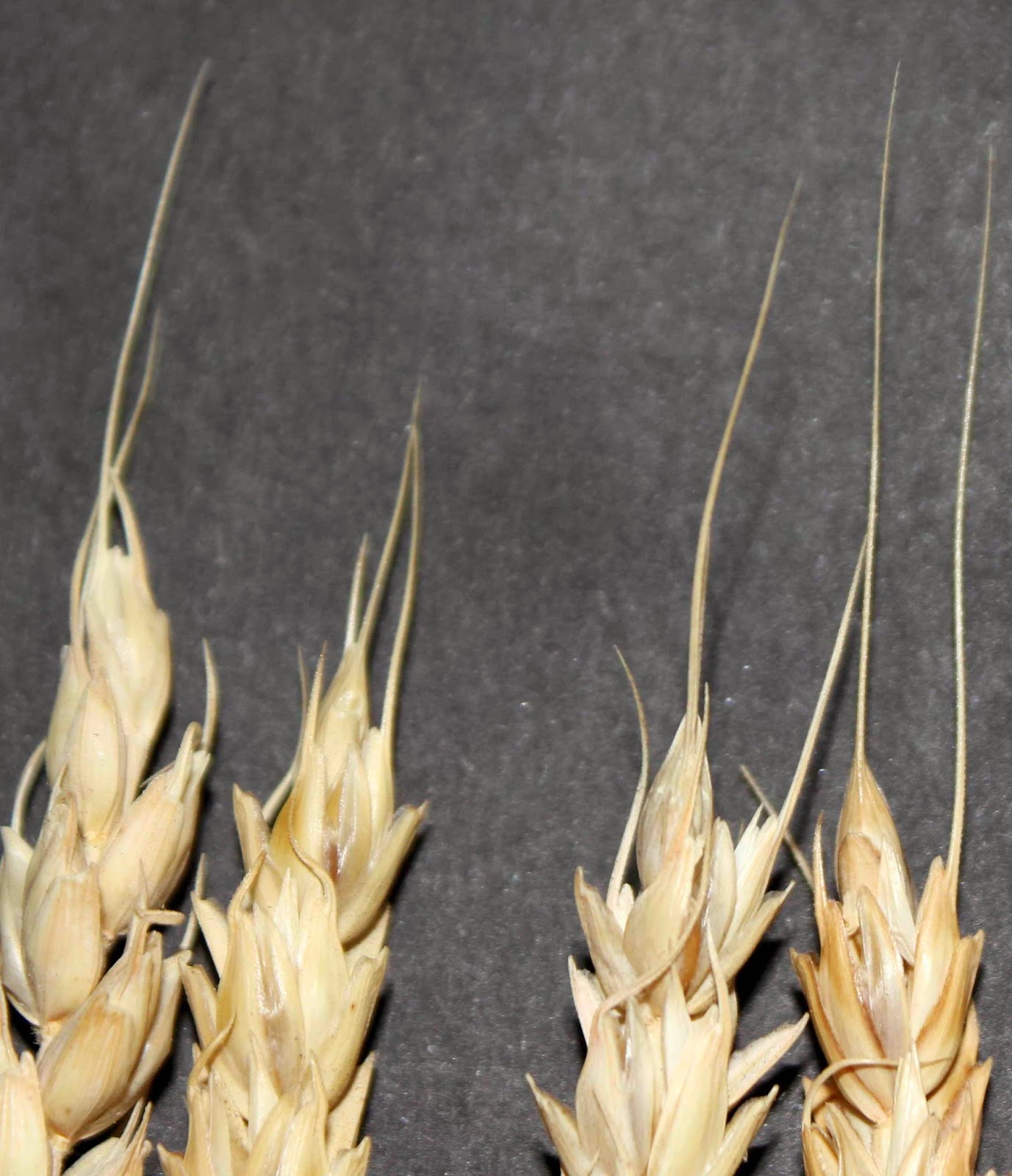 Red Fife went out of production in the Great Depression, but seed preservationists kept the variety alive and it has made something of a comeback.


A true land race, its qualities have contributed to many varieties since 1842 when Canadian farmer, David Fife, planted the first seeds to arrive in the western hemisphere on his farm near Peterborough.

It was named “red” because of the rich color of the kernels.  But growers find it is sometimes quite light colored, as it adapts to a mild weather terroir.

Red Fife is thought to have originated in Turkey and was grown in Ukraine's prolific farmlands, probably favored by Mennonite farmers.  The story is that it found its way to Canada when a friend of David Fife saw some good-looking wheat being off-loaded in Glasgow, from a ship just arrived from Gdansk.  Some versions of the tale insist he gathered up all he could in a winter "bonnet" he was wearing, mailed it off to his friend, and the rest is bread baking history.
It is wonderful to have Red Fife growing in our area.  Over the years it has proven to have inherent diversity, a good adaptation to a range of soils, moisture levels, and temperature.  It has a reputation for robust flavor and fine baking qualities. 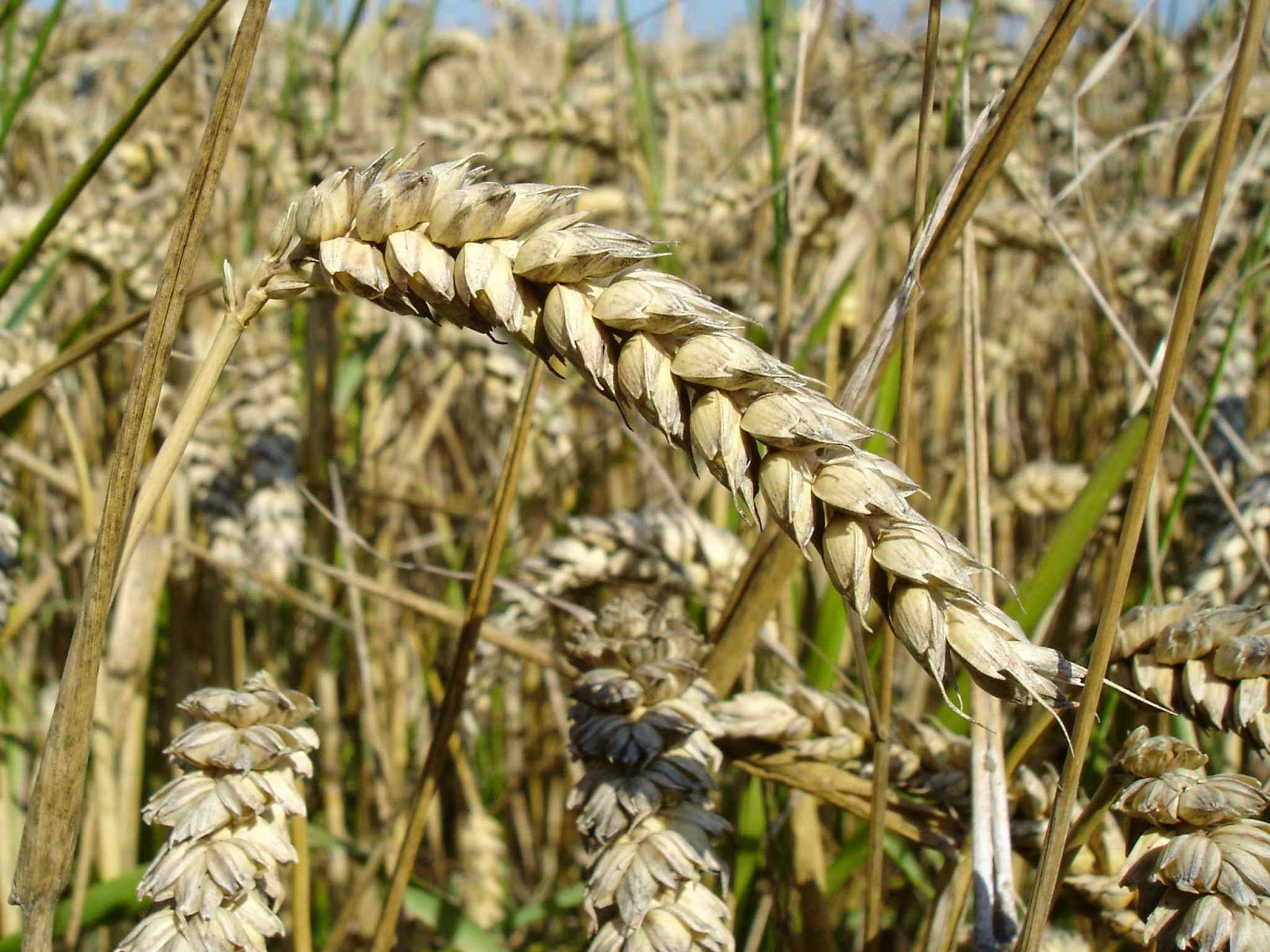 In the next post, we'll talk a little about our other Lompoc-area wheat, GLENN, another fine grain for making bread. 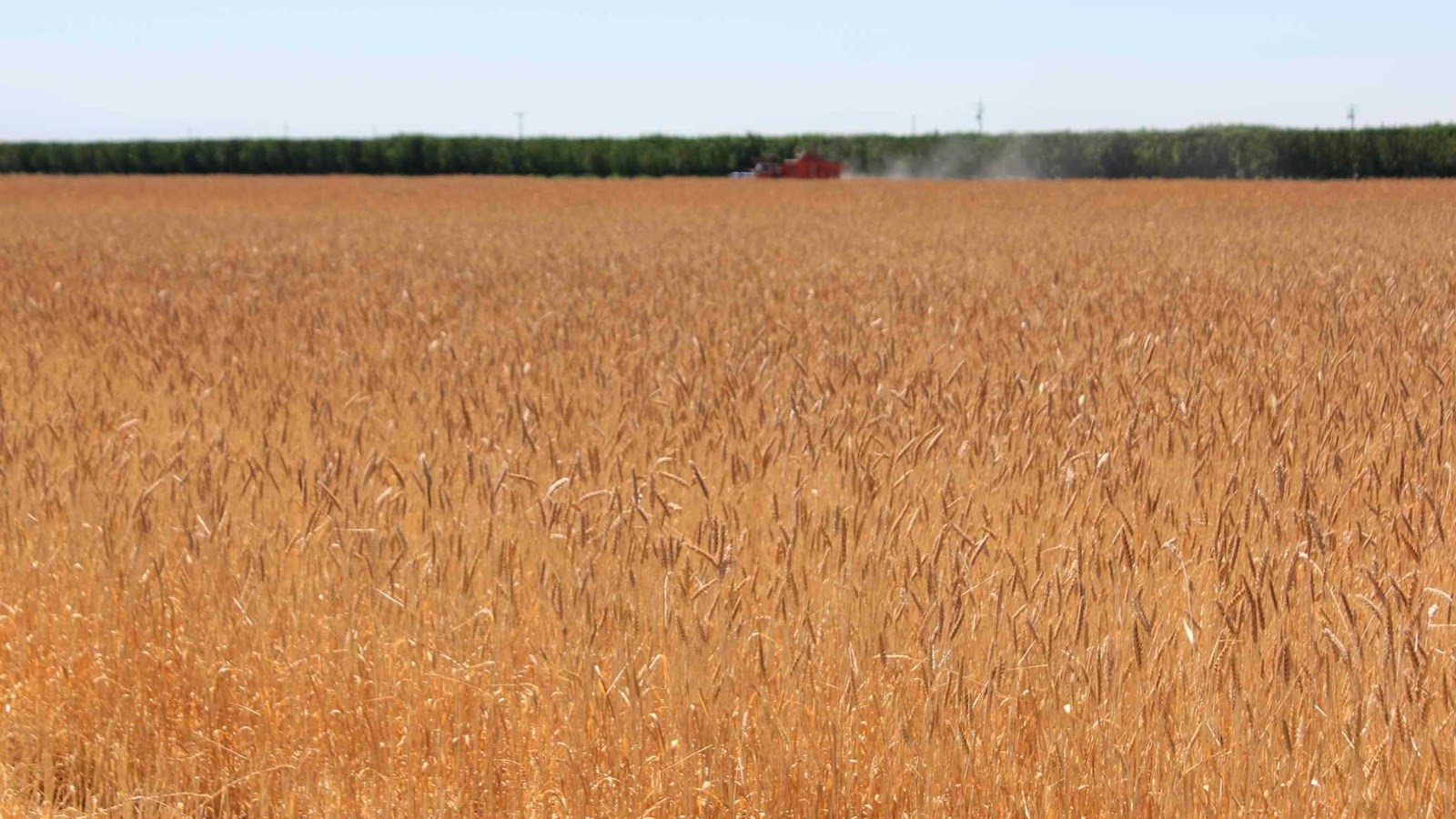 A lovely field of Soft White Sonora Wheat has been harvested in Delano, CA, just south of Fresno.

About eight and a half acres were planted by Amos Bergman and Nate Siemens in early February.  Assisting with the harvest is Nate's brother, Justin.

The wheat field is surrounded by cherry and almond orchards, 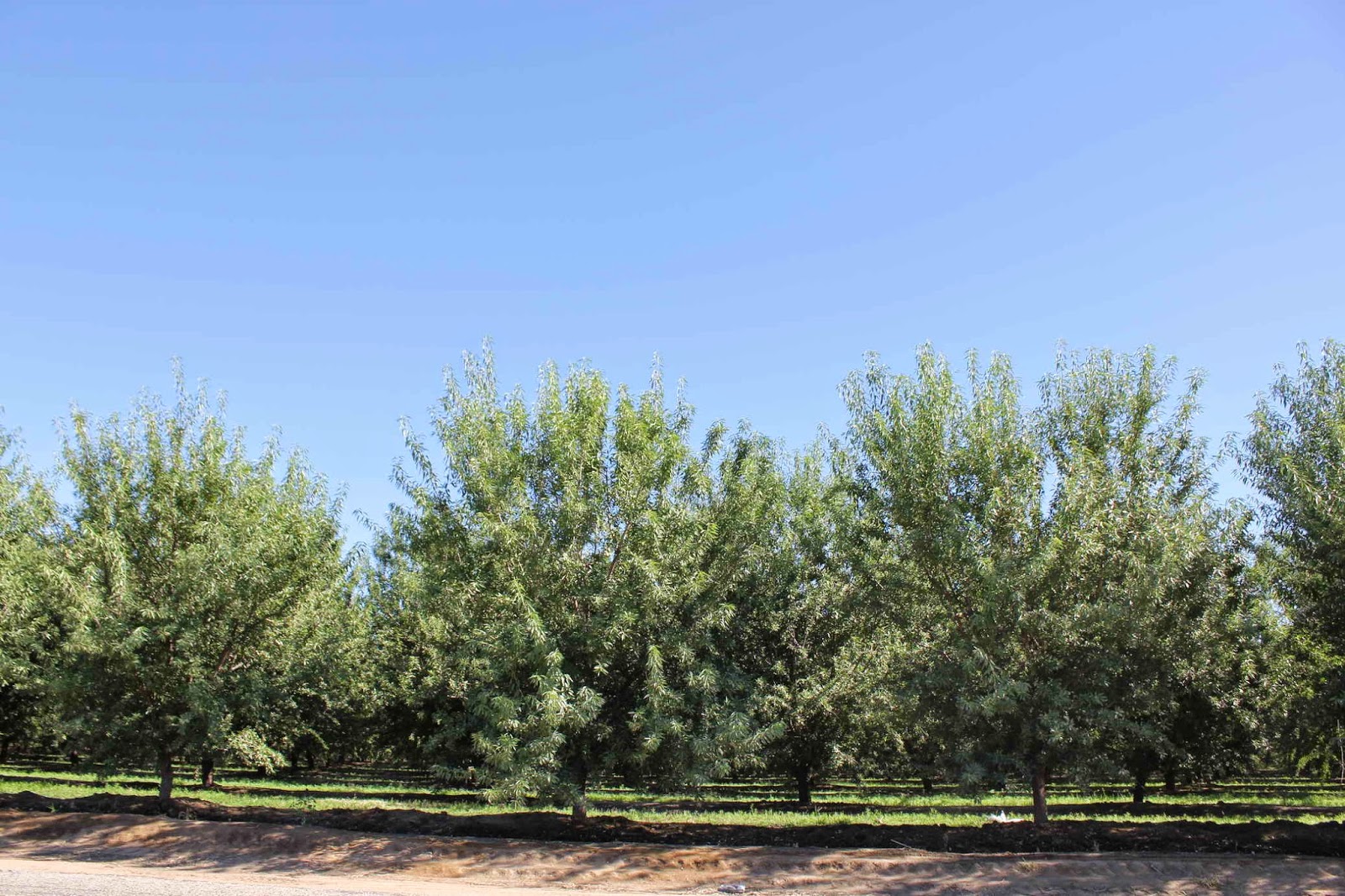 along with fields of tasty table grapes. 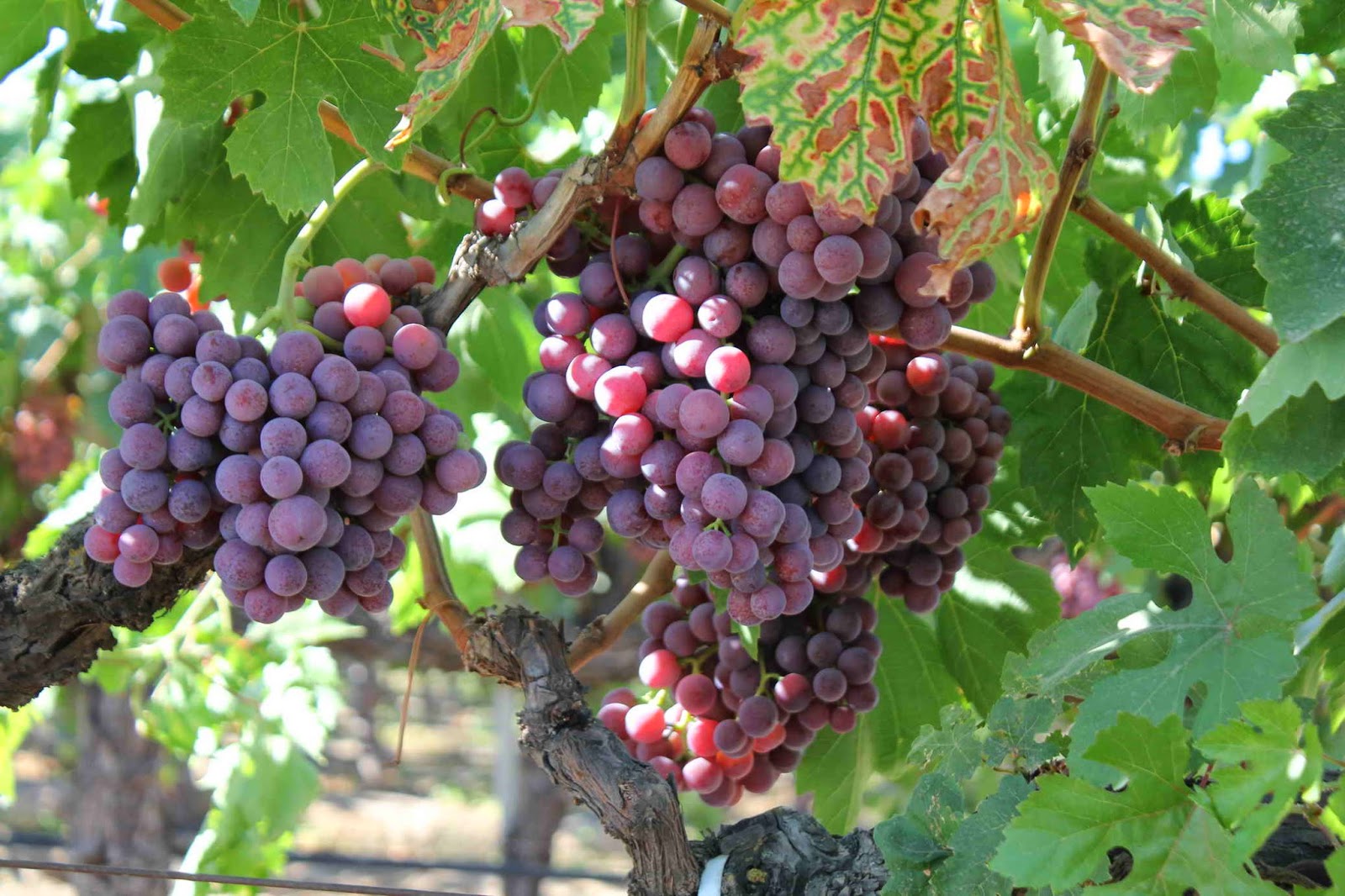 Amos nursed a classic, 60-year-old, Allis Chalmers combine back to life.  And the team set it to work on the very ripe Sonora.
The wheat was planted the first week in February.  It was irrigated once, on Valentine's Day, two weeks later.

Except for two brief dustings of rain, this is the only water over the entire five month growing period. 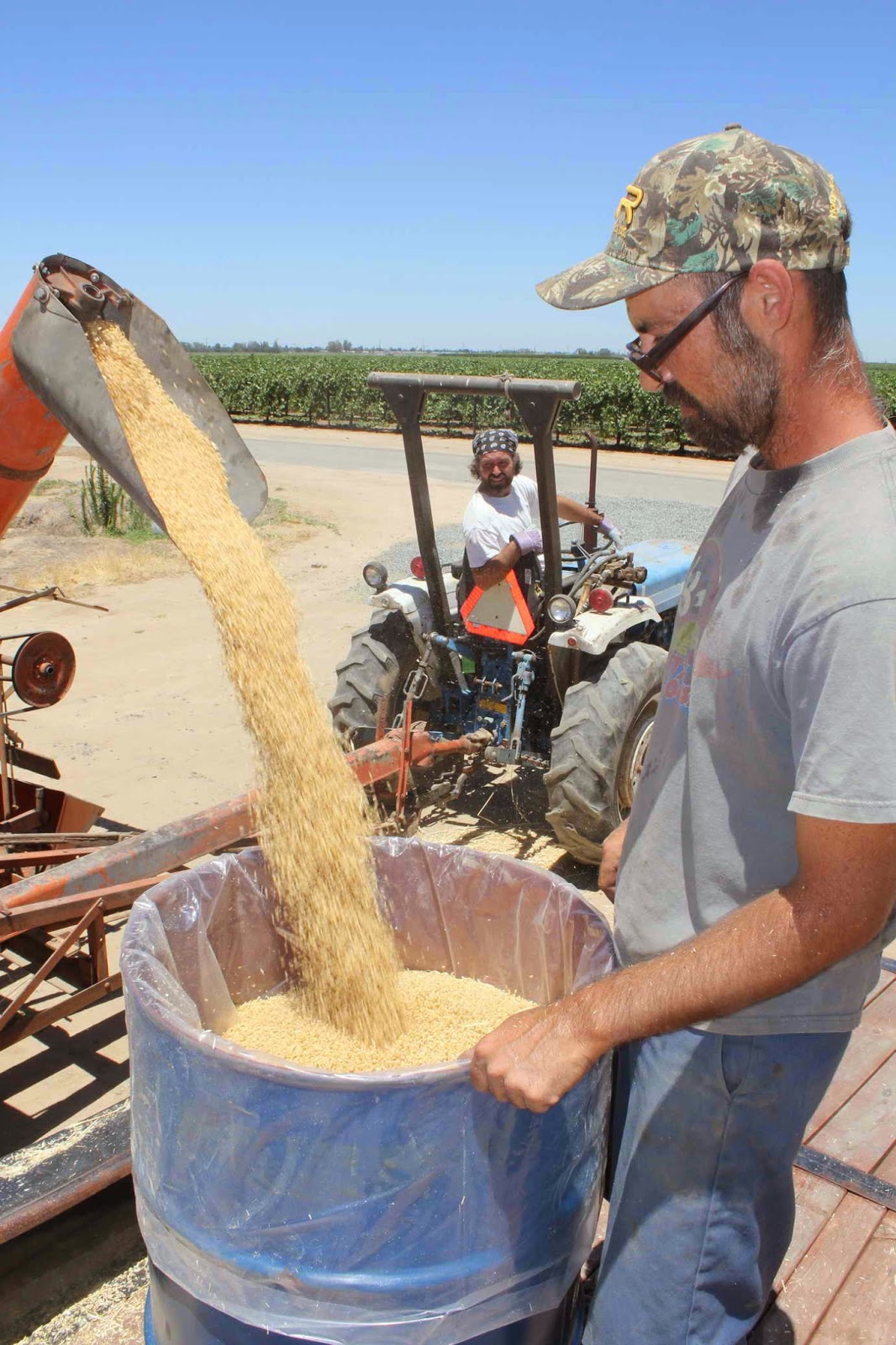 It is an impressive demonstration of this Sonora's drought resistance. 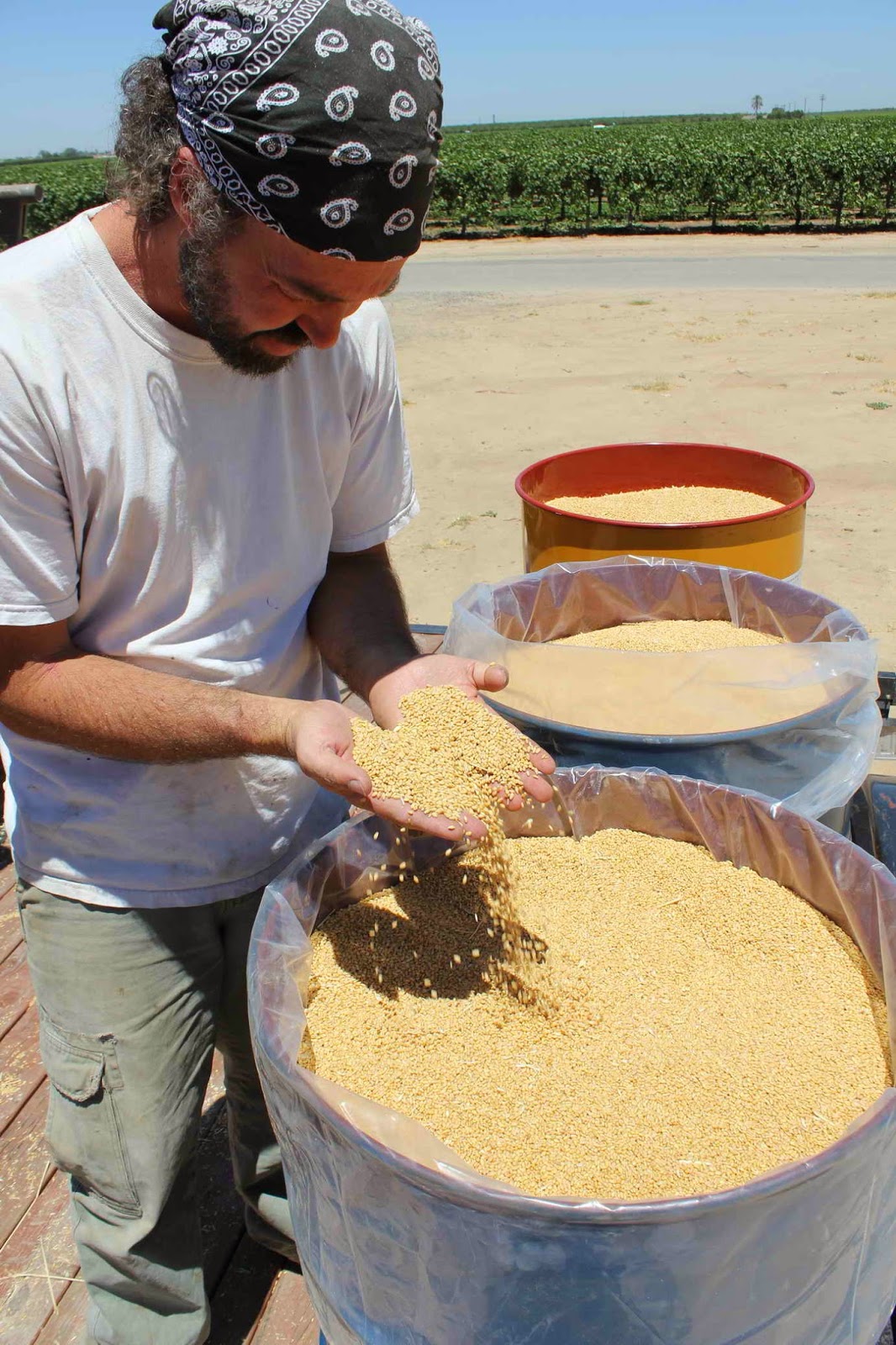 The patch of Vavilov wheat, growing in Emerson Avenue Community Garden, has surpassed its neighbor, Brazilian Lavras, in height.  However, half a dozen of the plants growing in the Vavilov patch are maturing before their comrades, at a height that is more than a foot shorter.
Most surprising, the stems of these plants, and particularly their seeds heads, are deep purple in color. 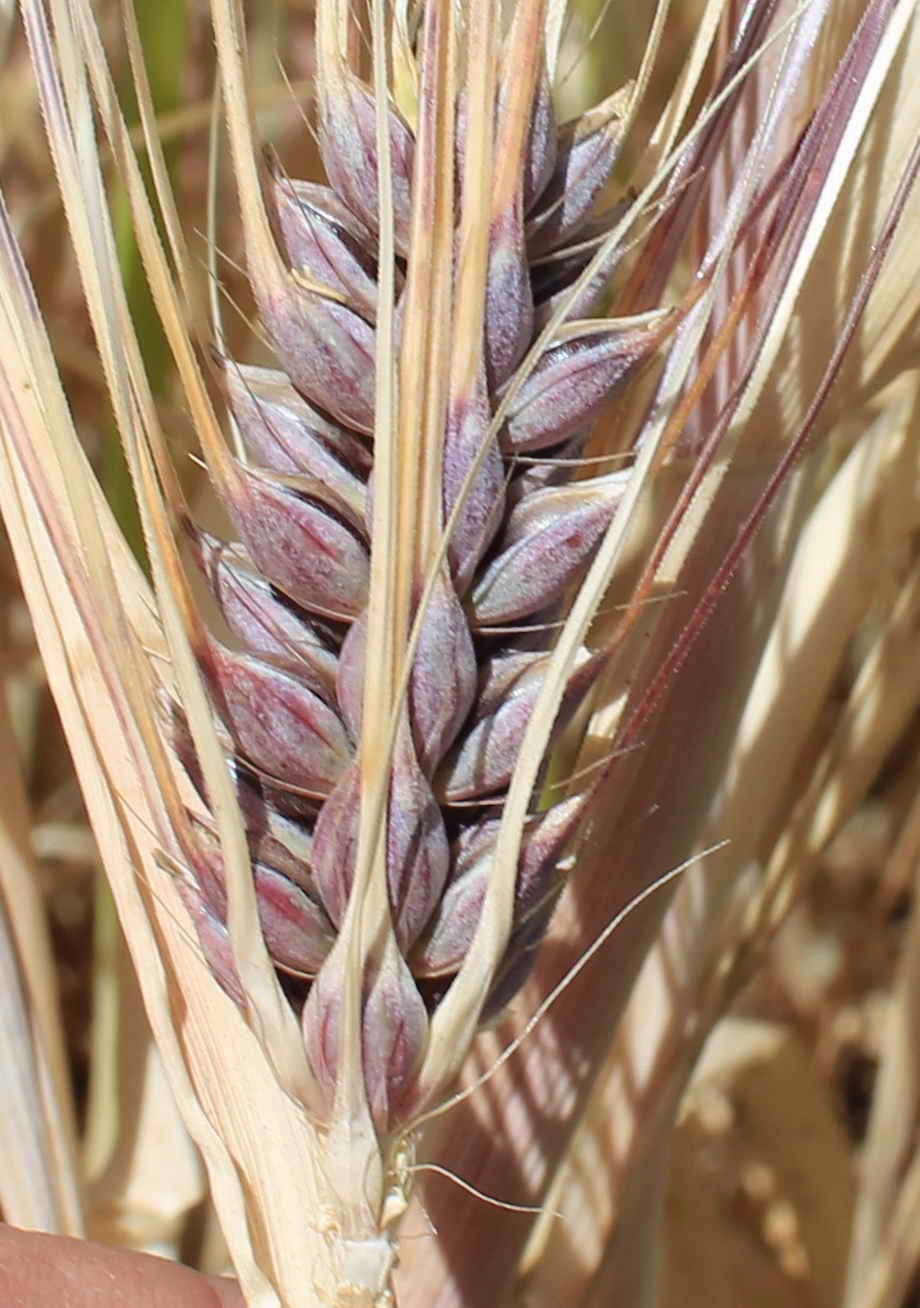 And yet another thing.  Many of the taller, green seed heads have an odd shape, with a broader base of kernels, becoming more regular on the top half.  Breeders experienced in Vavilov growing say it often has uneven seed heads. 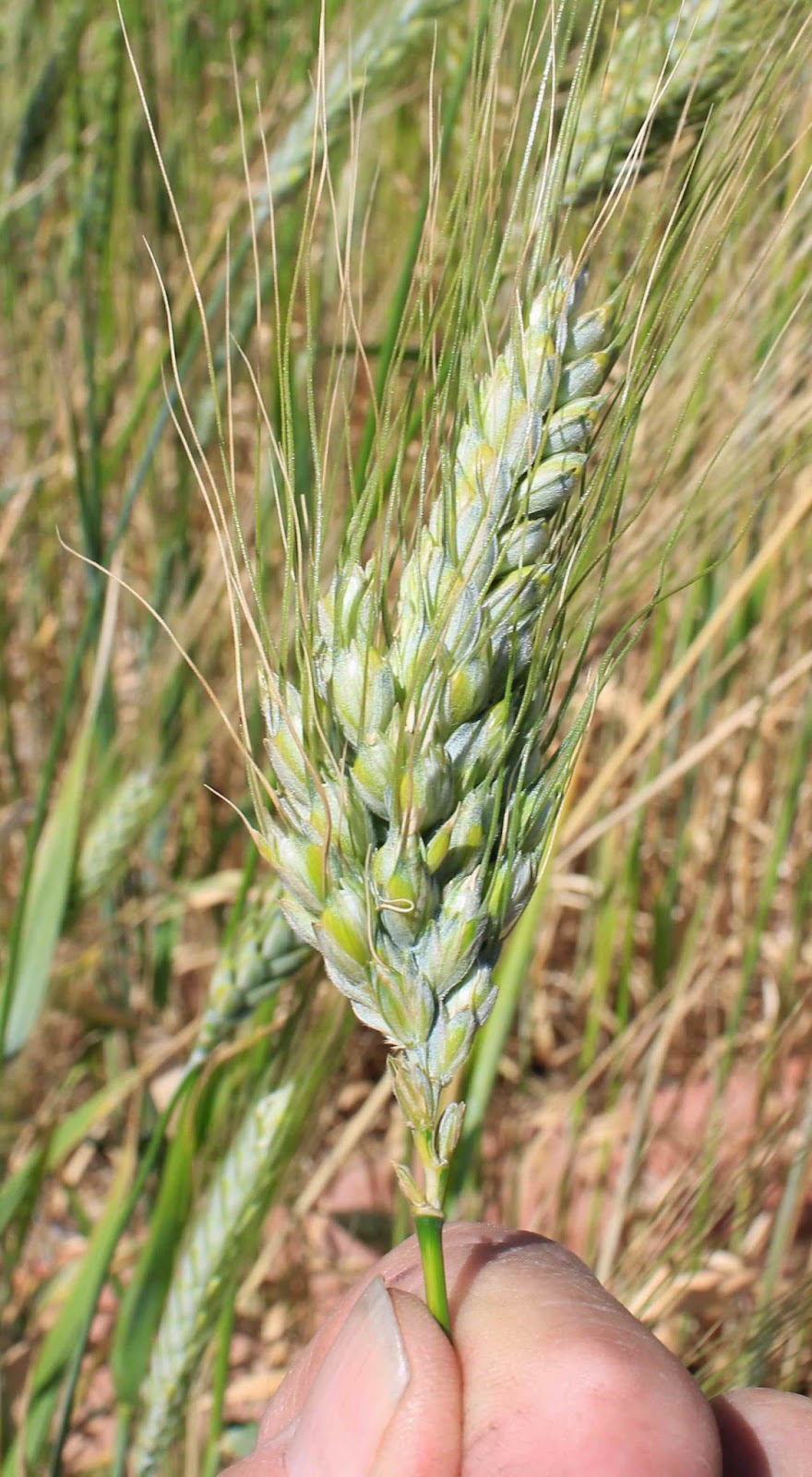 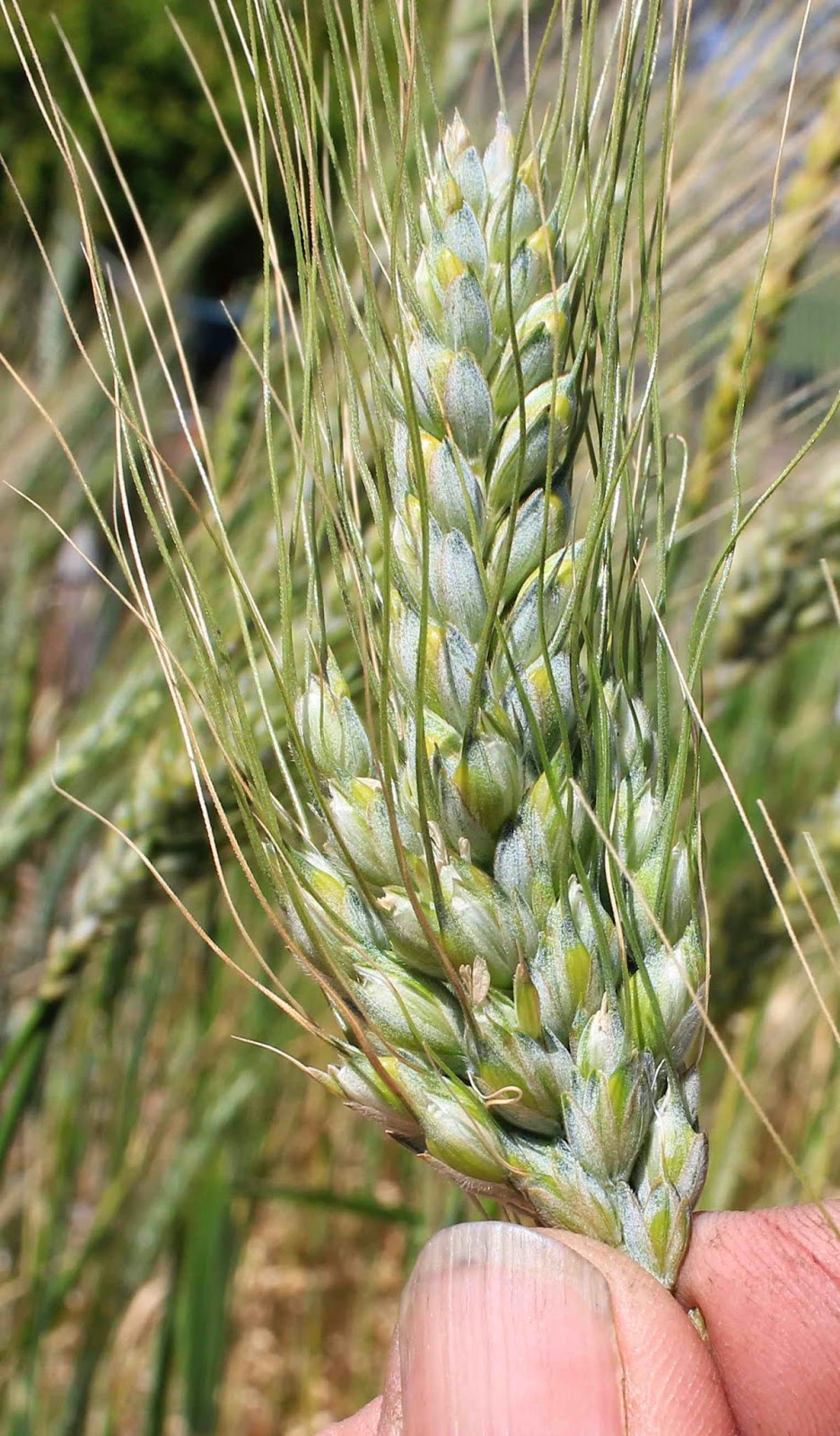 Vavilov is considered challenging to thresh.
Posted by Paul Morgan at 6:44 PM 4 comments:

Here is some impressive progress in Curtis Davenport's Sonora fields, which he planted in mid February.


Here is a closer view of the developing seed heads. 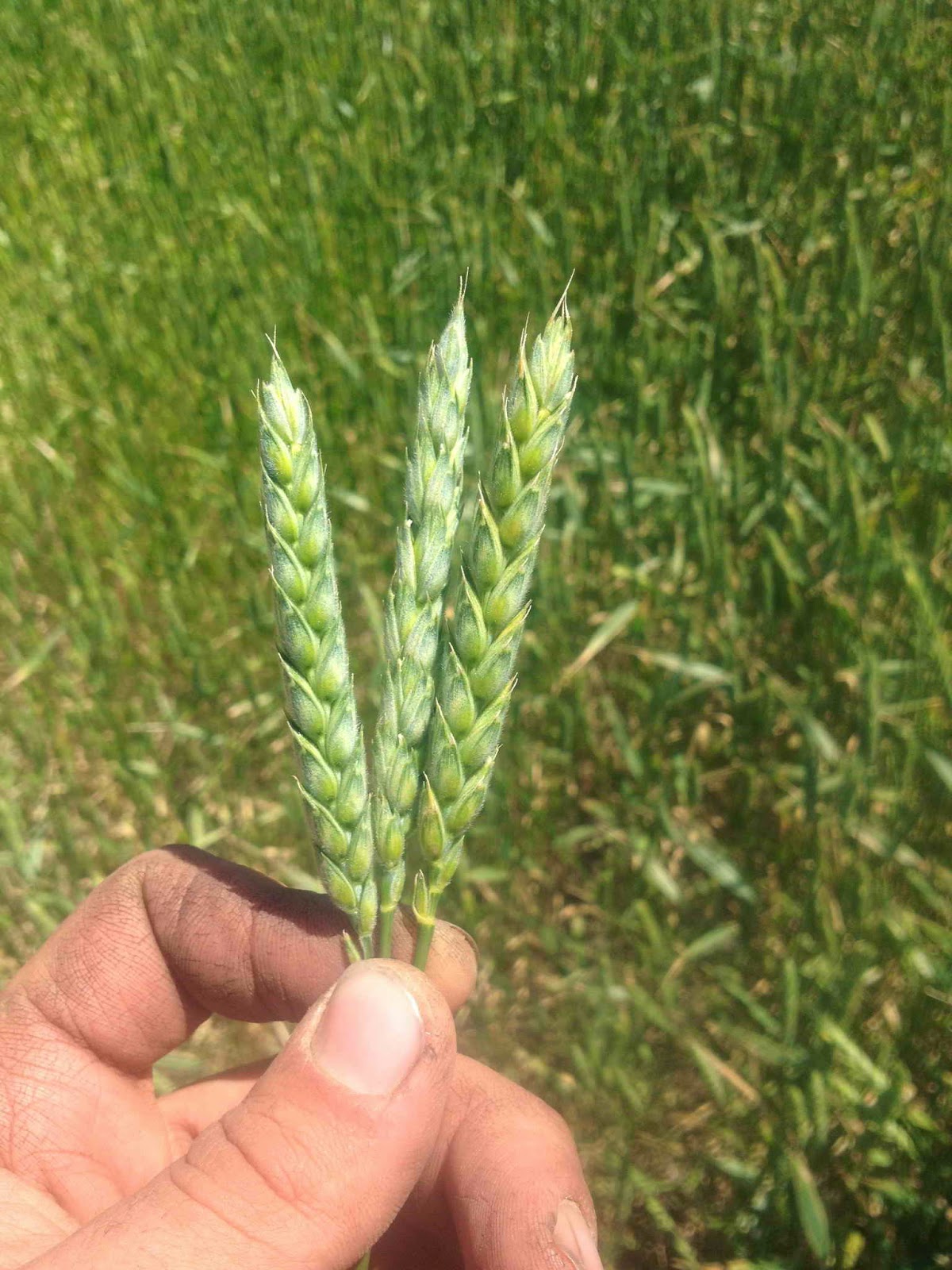 Rains have been encouraging, but additional irrigation has been necessary.
Posted by Paul Morgan at 11:57 AM 2 comments:

Following up on Community garden grains, the seven varieties of wheat in the Emerson Avenue Community Garden are in different growth stages.
The Black Einkorn and Russian Timopheevi show early leaf and root development.
The soft white Sonora has developed some plant height as the distance between leaf nodes increases.  The inflorescence, or fruiting body, is just beginning its travels up the elongating pseudo stem.  The Emmer is approaching boot stage, with the seed head nearing the flag leaf, at the top of the pseudo stem.

Much of the Vavilov is in boot stage, or showing a swollen boot. 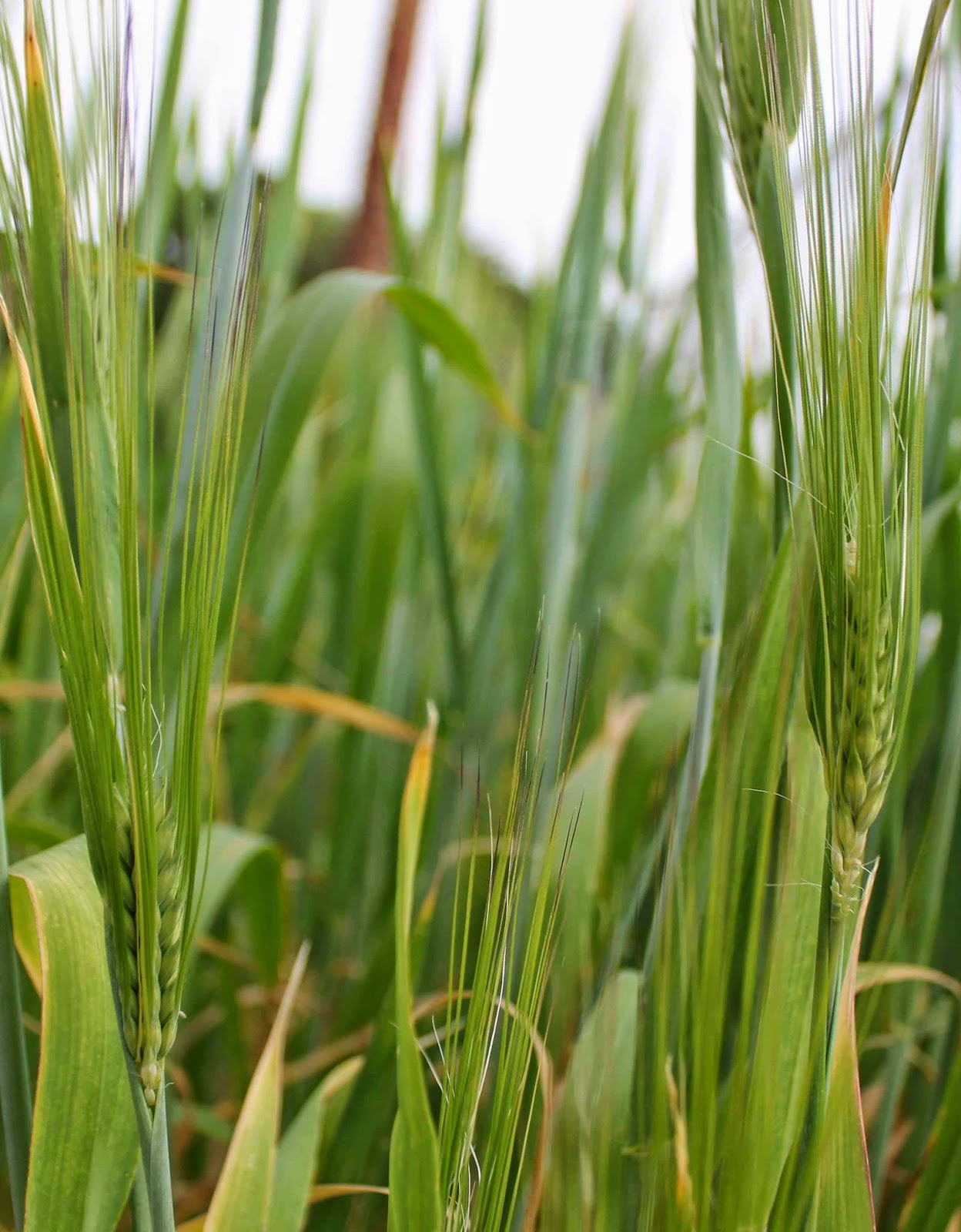 while other plants reveal just the tips of their awns above the flag leaf collar as the heads begin to emerge.


The India Jammu is currently in the lead, showing most of the heads in anthesis, or blossoming stage.  This means only final seed development and ripening remain before harvest.

Anyone know what the coloration means on the Vavilov?  Stripe?  Rust? 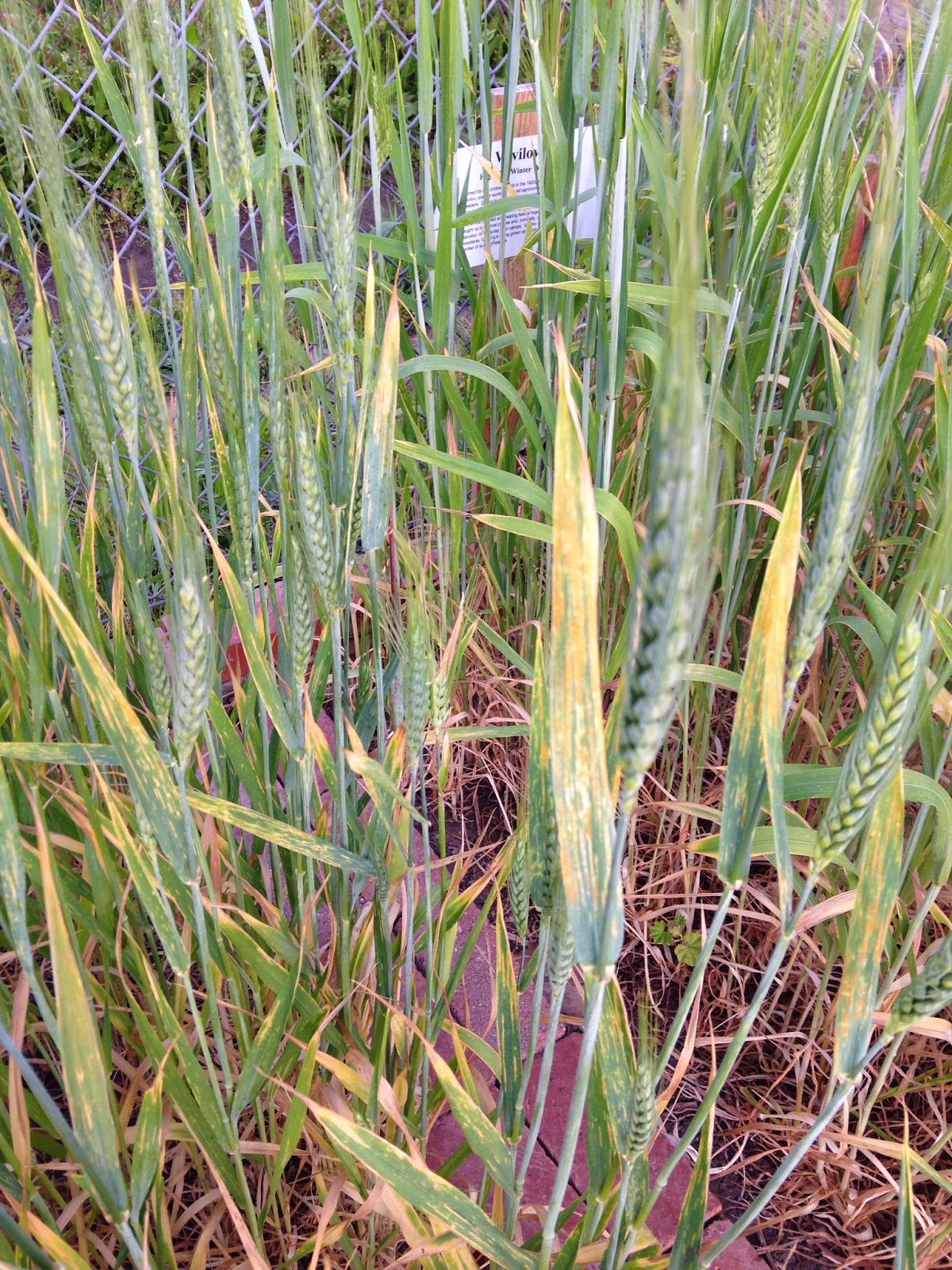